We just finished up a what turned out to be a really nice Agile training event in New York City called the Agile CampFire.  After many days of preparation, and with some glimer of doubt about whether all our planning would pay off we began the event bright an early at 7am.

The event overall was a simple concept; we take a standard iteration in a an agile development envrionment (typically 2 weeks at a minimum) and condense it down so we can fit two iterations into a single day.  After some donuts and coffee Steve Bohlen gave a brief presentation to our 5 development teams that would set the stage for the day.  From there each team jumped right into an planning poker session where they estimated a series of user stories which they were expected to implement using Test Driven Design.

Each team got started developing right away and the enthusiasm was extremely high.  The teams consisted of 6 developers who were grouped into pairs and instructed to work using a technique called pair programming.  The teams all made quick work of the user stories with our winning team exceeding there anticipated velocity of 17 story points. 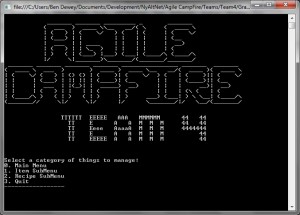 Overall I think the event was a great success, something I would definately consider doing again.  Thanks to all the people who made this event such a success, we have Rachel Appel, Daniel Berlin, Steve Bohlen, Alex Hung, Peter Laudati, and Erik Stepp, great work everyone.